On April 4, 2019, at the Moscow Expocentre in the course of the RosBuild'19 exhibition took place the solemn announcement of the results and awarding of the winners of the first industry expert prize in the field of wooden construction - PROWOOD'19.

SEE ALL PHOTOS FROM THE CEREMONY

THE AWARDS AND WINNERS '19 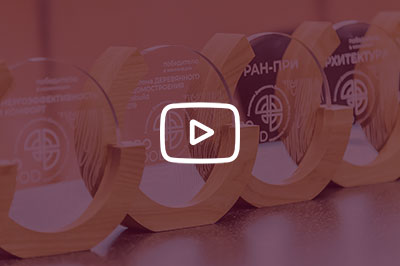 Kalach in Russia has always been considered a symbol of prosperity, welfare and abundance. In the modern world a wooden house is also a symbol of well-being as long as it is of high quality, warm, cozy and comfortable. That is the reason why the kalach became the symbol of PROWOOD AWARDS, its prize for the nominations and the Grand Prix - comfort and quality of life became the main criteria of the competition.

The authenticity of PROWOOD AWARDS, in contrast to many existing architecture and construction awards, lies in the fact that the Awards examine the contestants’ projects from different perspectives. Three nominations evaluate projects from the perspectives of architecture, energy saving and comfort, as well as technological efficiency and quality. Such a comprehensive approach provides an adequate assessment of a project as a whole, and not of particular individual aspects. A house is not only a facade or specific materials or engineering systems. The quality of a house and the quality of life is determined by how well do individual elements work together.

In each of the three nominations, three experts assessed the submitted projects, and as a result the projects were evaluated by 9 independent specialists in different areas.

The project that ranked the highest score according to the total assessment results won the Grand Prix of the Awards. The Grand Prix winning project became the LEGEND house in the Moscow region, implemented by NATURI company according to the project of the architect Maxim Stepanenko (architectural company ASB Karlson and K) with the use of the latest Russian innovative technologies - Twin Beam vertical glued beam.

In the Technological Efficiency and Quality nomination the jury considered in the first place the reliability and durability of structures and materials made of wood, their manufacturability and properties that they will demonstrate in 20 or more years of operation. According to the sum of the assessments upon 14 criteria by three renowned experts in this field, M-1 SPORTS ARENA designed by the Yarra-project team led by Vladimir Mosyak and implemented in St. Petersburg by Rus’ Corporation won this nomination.

Eco-sustainability of competing projects was assessed by 20 parameters in the Energy Saving and Comfort nomination. And again the LEGEND project by NATURI won a landslide victory with the highest score.

An almost unbelievable situation took place in the Architectural Solutions nomination voting: according to assessments by three independent expert architects, each of whom could assign a project from 0 to 50 points, two projects received the same score number. As a result of additional voting a unique sports facility in Crimea, the TENNIS COURT designed by Pavel Kargalev, implemented by ALPBAU at only one point difference became the Awards winner.

And by chance, the second contender for the Architectural Solutions nomination also received the Award. PROWOOD'19 partners and organizers and participants of the Expocentre RosBuild 19 exhibition gave vote to Skolkovo AMBAR CAFE designed by the architect Anton Savelyev. The project was engineered by Alexey Knyazev and implemented by NORVEX company.

The winner of the "Quality of Light - Quality of Life" award, established by the RosBuild'19 partner - VELUX, became the DISCOVERI PARK SALES OFFICE, project and implementation by A-HOLZ.

In addition to the main Awards nominations, the organizers awarded diplomas to the short-listed objects - 15 projects that got among all the participants of the competition the highest score in the three main PROWOOD'19 ratings and were considered contenders for the best object title - a modern symbol of well-being. The sketch boards of the Awards nominees had been presented at the Moscow Expocentre on April 2-6, 2019 in the course of a special section at the RosBuild'19 exhibition - the Wooden House Construction Salon.

The unique system of comprehensive and transparent projects assessment increased interest in the timber construction industry, and the Awards are expected to become one of the main annual events. Already in May 2020 Applications for PROWOOD'20 are expected to be open, so nominees will be able to submit projects implemented in 2018-2020.